Sunday morning 8 am and it’s off on a ten hour drive up to the remote highlands of Sutherland in the far north-west of Scotland. The destination is the Scourie Hotel, one of the most famous fishing hotels in these islands. I’ve been going up there for 15 years and the excitement never diminishes. This is truly wild fishing in some of the most dramatic, other-wordly scenery one could imagine. The landscape is almost lunar in its majestic bleakness. Great hills consisting of knuckly grey rock poking through the windswept heather. Trees are few and far between. The wind can howl and the heavens can open with a vengeance. And there are midges. 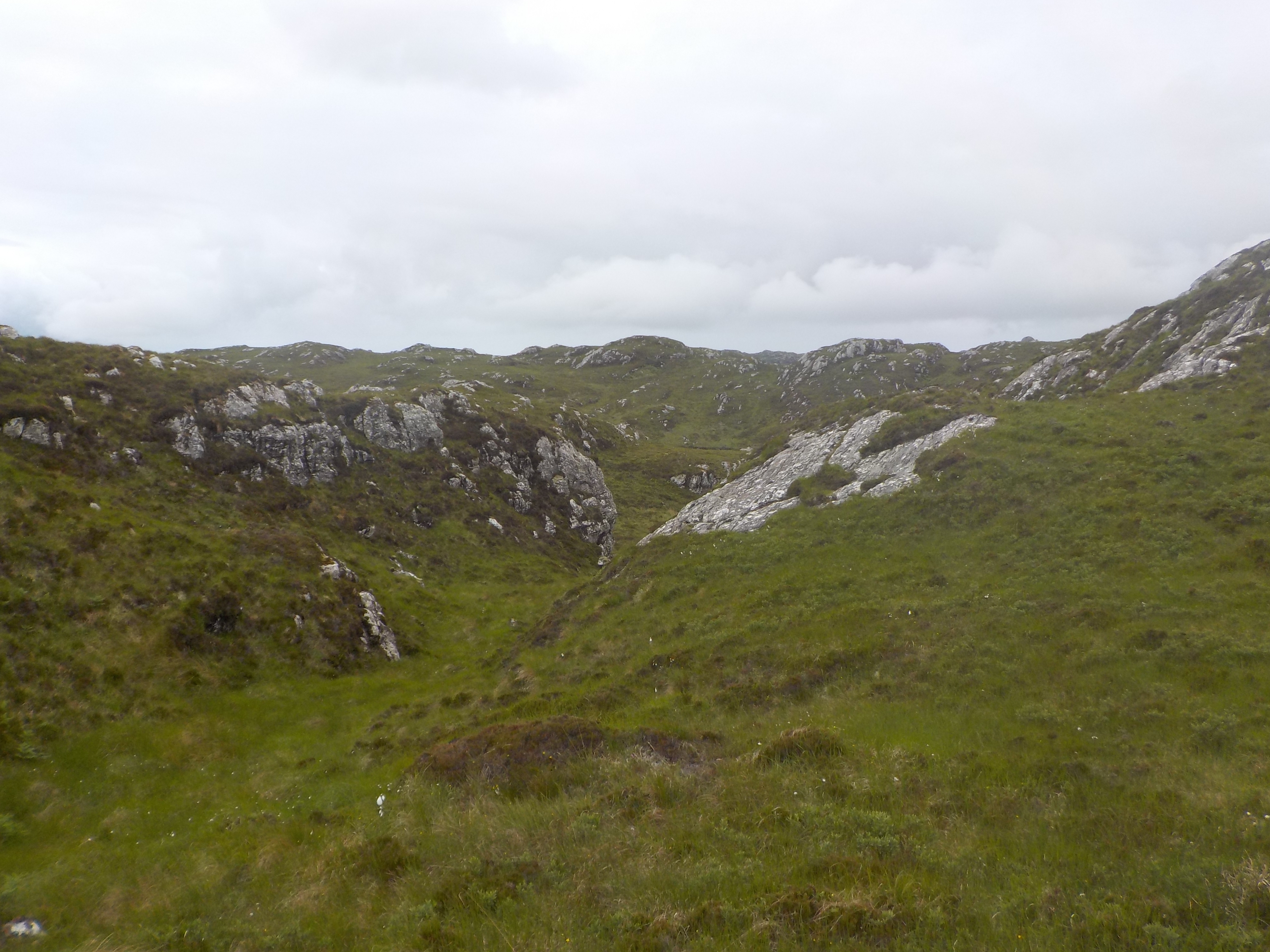 The hotel has literally thousands of acres of hill lochs divided into around 40 named beats. These lochs are home to millions of tiny fish, a handful of monsters and many in between. The walls of the downstairs rooms of the hotel are festooned with huge trout mounted in glass cases – ranging from 4 to 7 lb. And these were not caught in 1921 or 1934; some were caught last year or the year before that. Yet for all the years I have been coming, my biggest fish is 1.5 lb. Each year I am determined to do better. Most beats have one large loch surrounded by numerous smaller satellite lochans. These smaller waters are where the big trout reside. To catch them, stealth is the name of the game. Creeping up to a small loch on your hands and knees and casting 15 yards from the bank so that most of your line lies in the heather and only the tippet touches the water is often what is needed if you don’t want to spook the better fish. In the past I have tended to gaily march up to the bankside and start flogging away. This year I would try to be somewhat more subtle…

I bag the Stalkers beat. This requires a 90 minute hike into the hills, but at least there is a decent path – one of the few beats with such a luxury. The big loch has a boat and I have had excellent sport on the water in the past. But this year I resolved to attack the smaller outlying lochans such as this: 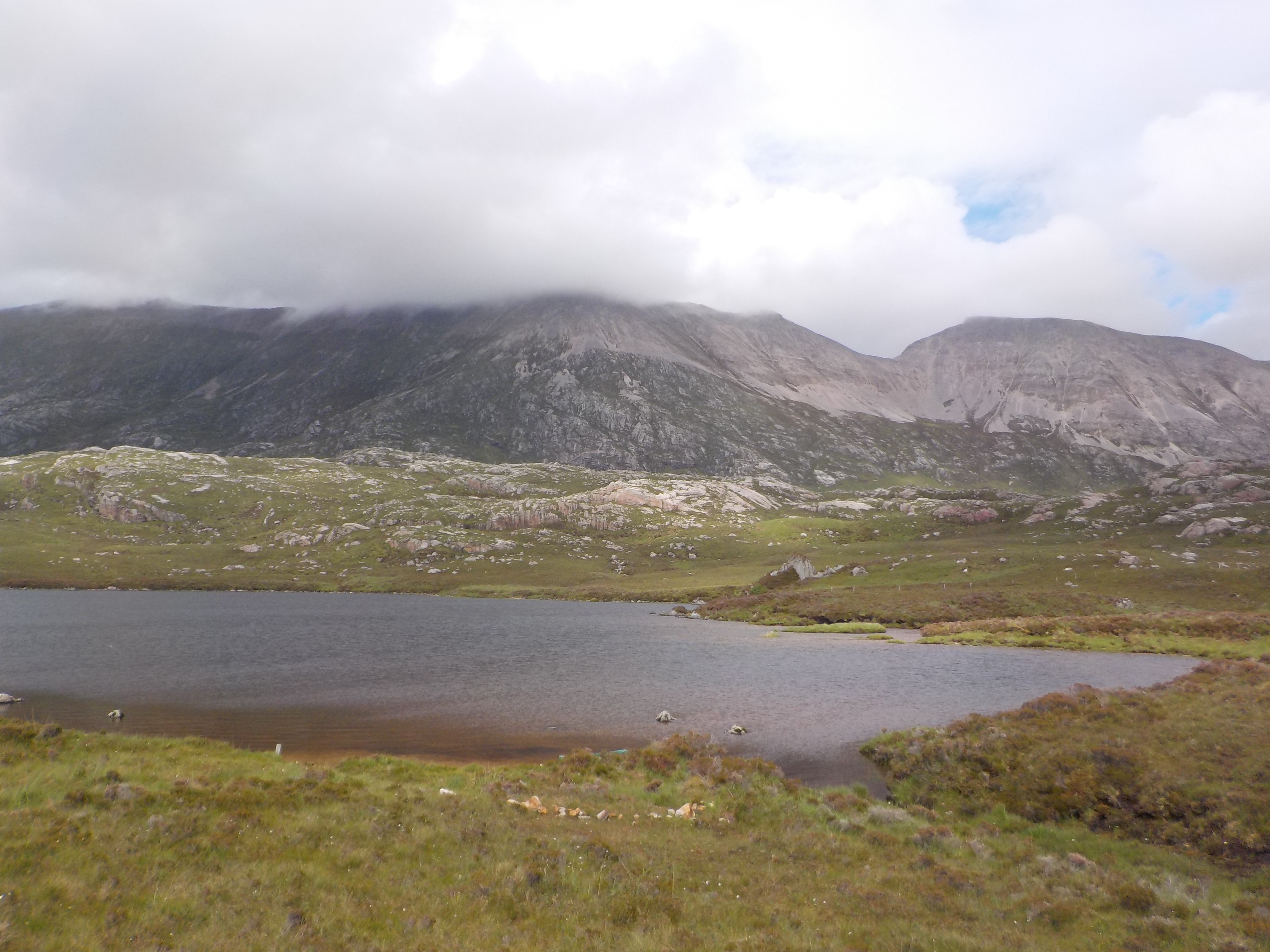 Keeping well away from the bank I tackled up my 10 ft 5 wt Chas Burns with a size 12 emerger. Sneaking up to within 10 or so yards I cast in and dibbled the fly through the nice wave – it was breezy. Four casts later and a sudden swirl at the fly. I struck and hit the fish. It was a goodun, boring deep into the water. Five minutes later I had him on the bank: 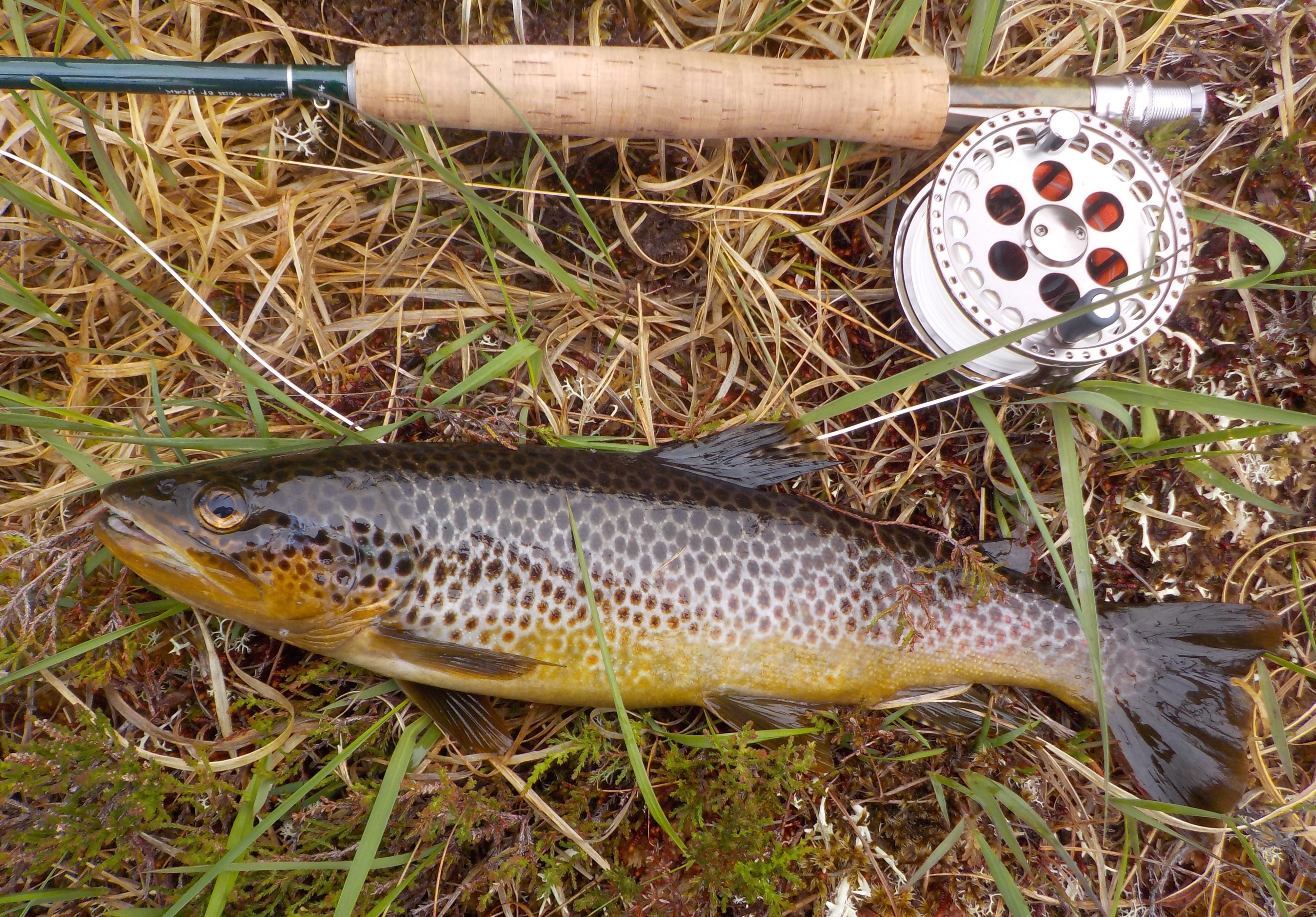 Superb. One and a quarter pounds of beautiful wild brown trout. To catch such a good fish so early in the week was a real bonus. My confidence skyrocketed.

As it happens that was by a margin the best fish of the day. Thereafter picked up 20 or so more of this ilk: 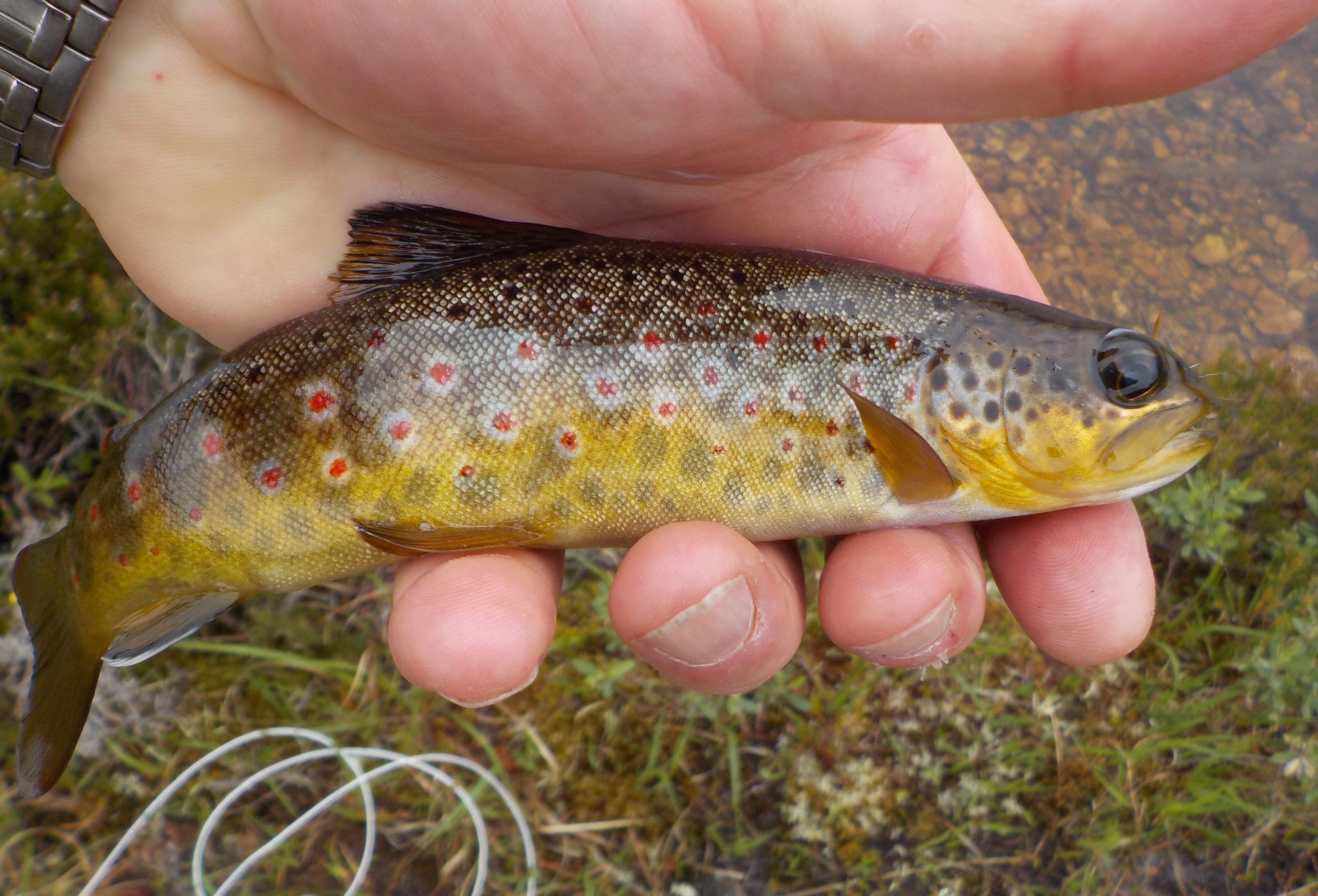 A great start to the week.

Freigart beat. This has a couple of small lochs known to hold big, big fish. And thankfully not such a long hike into the hills as yesterday. The first water I tried is called McKays. It is a strange little lock, sitting on a plateau with virtually no drop on the bank. It’s like a long, thin puddle on the moor but very deep: 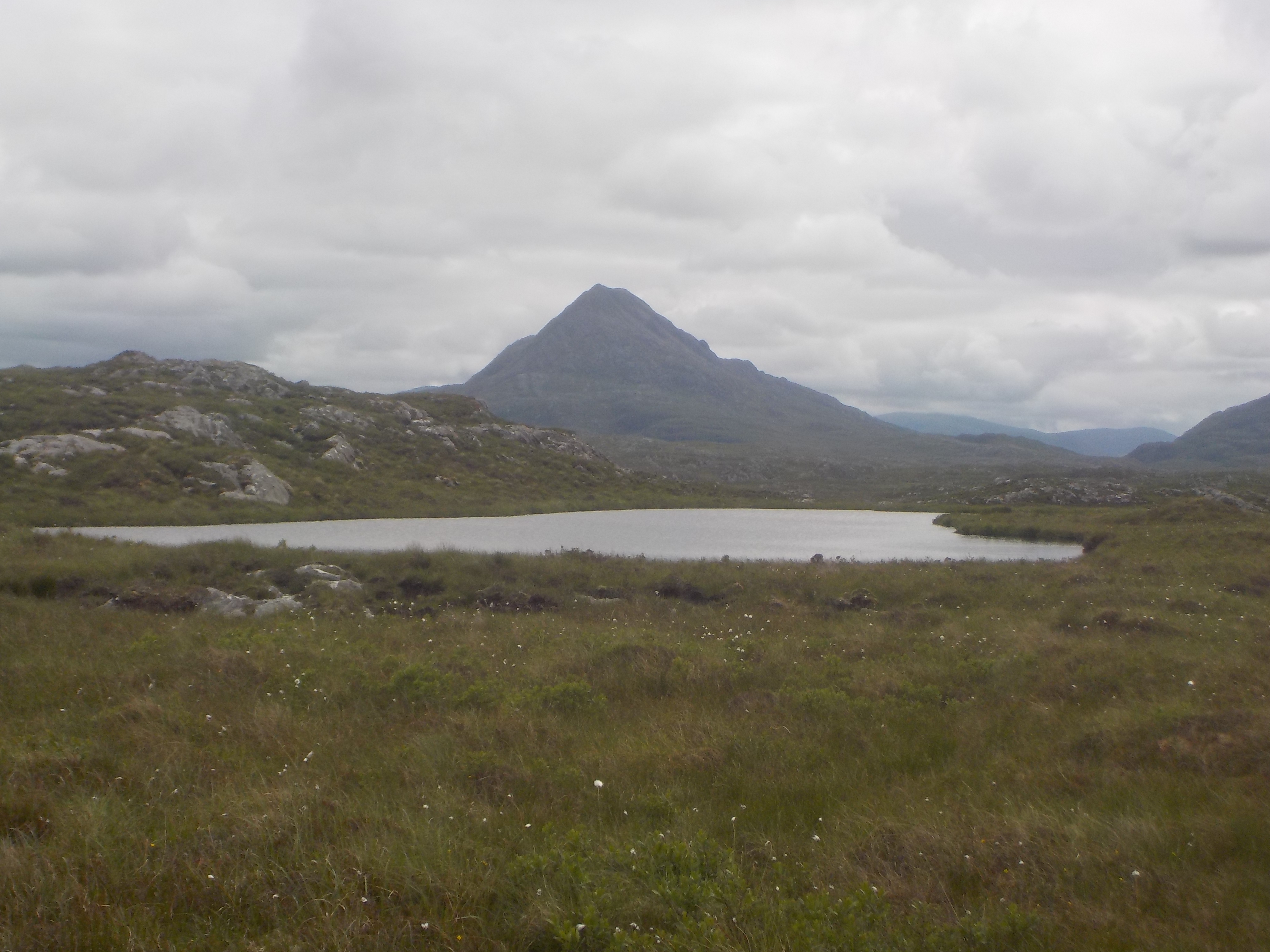 I tackled up and got on my hands and knees from about 30 yards away – getting soaking trousers for my efforts. I inched my way up to within 10 yards of the water and still on my knees cast in. I messed about like this for around an hour with no luck. I had seen one decent rise in the water so knew that the fish were there and that I hadn’t spooked them. In the end I had to stand up – agony – and carried on working my way up the loch (it’s only small – about 60 yards long). I did rise a fish right at the end of the water, but that was it.

Next up was a bigger water from which big fish have been taken. I saw one heading and tailing not so far from the bank, but although I reckon I covered it, the fish was too cunning to be fooled. So no luck, but nice to see some decent fish moving. I made my way home via a couple of other lochs and pulled out half a dozen of these gloriously coloured fish: 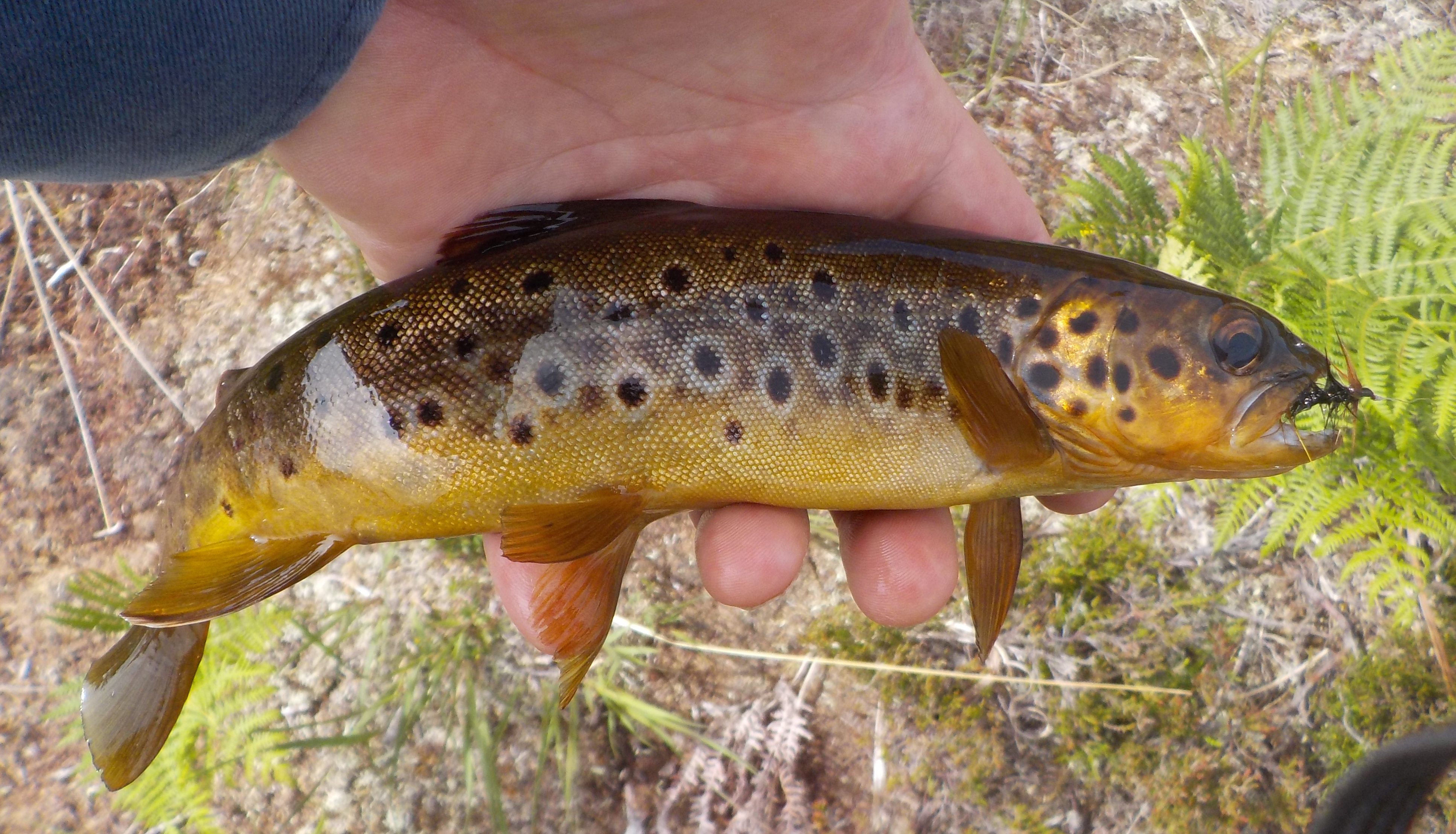 Mhuirt beat, a short but steep climb in the hills. The bigger loch on the beat is typical of the sort of water you find out here: 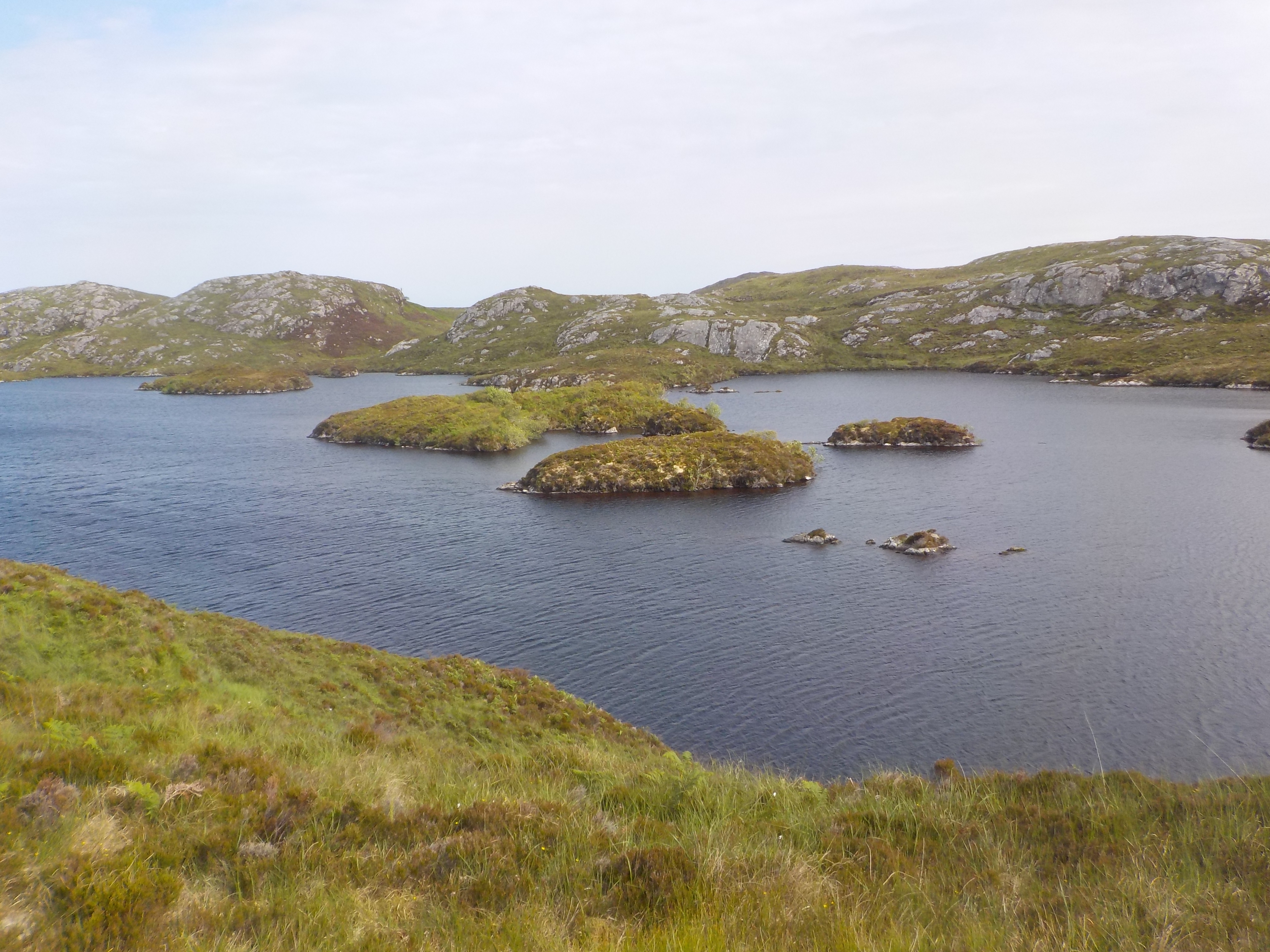 I fished pretty hard all day on the smaller lochs and picked up a handful of tiddlers: 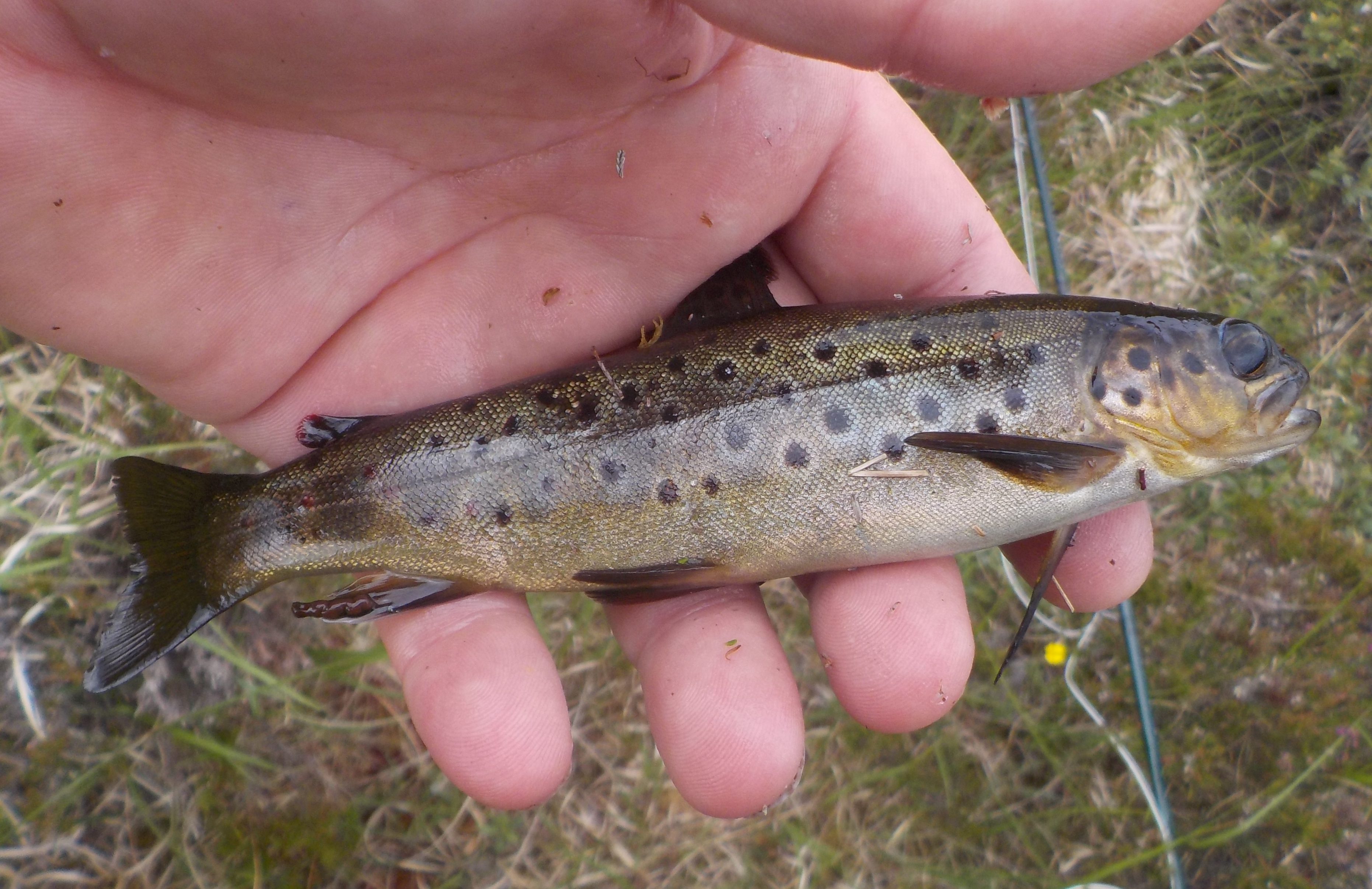 The variety of colour of the fish is remarkable. This one was almost black. Anyhow, last cast of the day and I hit a pounder. Didn’t have my net and it came off as I was trying to bank it.

Sedgwicks beat, probably my favourite. It’s a beautiful walk along the River Laxford, a lovely inky black river running from Loch Stack and a renowned salmon river (strictly by invitation! eg Prince Charles apparently. The trees around there have eyes and if anyone is daft enough to have a sneaky cast you will find an unamused gamekeeper materialising from nowhere). You then hike up a really steep climb and you are into a network of very juicy small lochans: 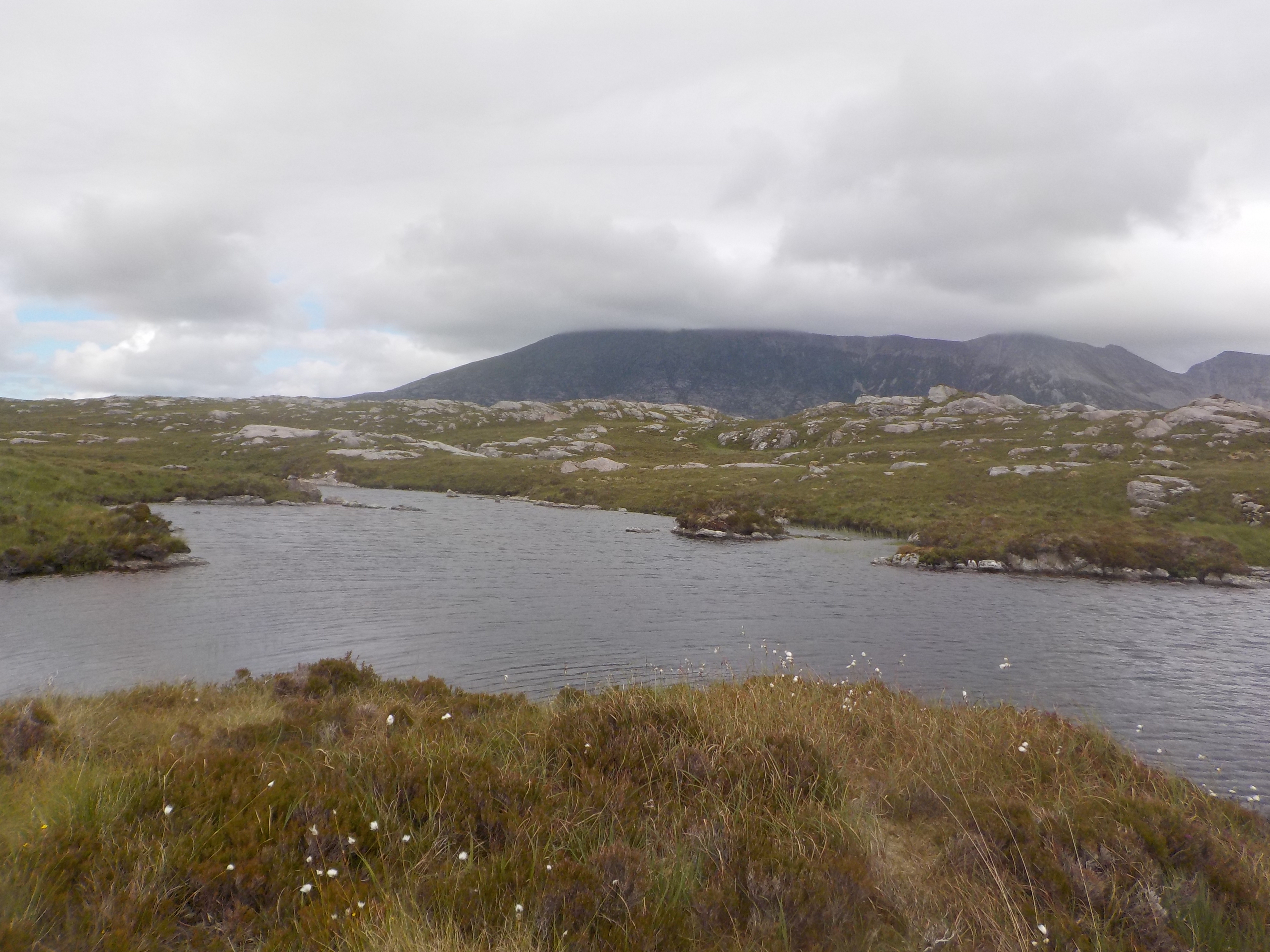 I made my way to a favourite loch which has produced fish of over a pound for me in the past. The wind was perpetually changing direction which was a nuisance. I fished the loch hard for nearly two hours had four fish, all small. Moved on to next loch, and second cast in some dark, shallow water and bang!

A beauty of just over a pound. Soon afterwards picked up another of around 14 oz before moving on to a nice looking little chain of three small lochs. I fished the first and immediately rose a nice fish which connected but came off. Moved to the next loch in the chan and four of five casts in and wallop! A nice fish doing cartwheels in the air. I was glad I had a 5lb tippet. Got it in after a good tussle, a pound and a quarter: 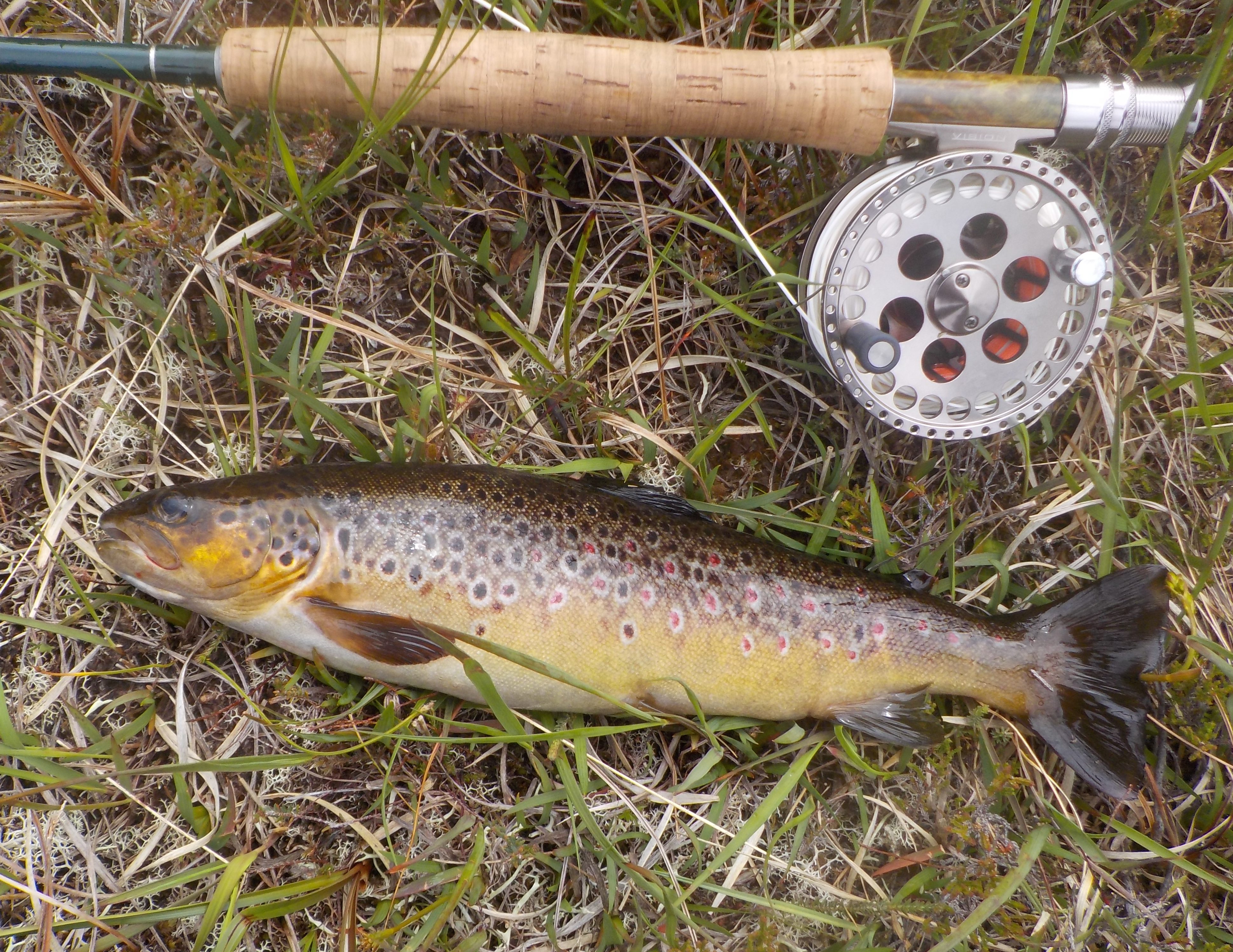 Ten fish for the day, three big enough for the pot. Magic.

Last day and I bagged Mid Chain, a beat with many small lochs high in the hills and containing very good fish. Other guests in the hotel had been up earlier in the week and tipped me off that the splendidly named Quaky Banks lochan had shown some promising activity. This loch looks similar to McKays in that it is flat and low with no steep banks. The bankside is highly squelchy, hence the loch’s name.

I duly slogged my way up and fished a few other lochs first, moving one decent fish but not connecting. When I got to Quaky I was determined to treat it with respect. I put on a mayfly emerger pattern: 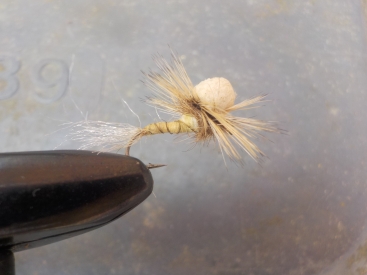 Once again I got down on my hands and knees from well out and began crawling to within casting distance. Nothing was rising and water was seeping into my wellies. The wind was getting ferocious, but it was behind me at least. From a kneeling position I managed to get the fly onto the water, with about 15 yards of line trailing on the bank. I tickled the mayfly in, pleased with the wake it was producing. Nothing on that cast so I had another and then a third. Suddenly as the fly was about three feet from the bank a large black arc broke the surface and my line went tight. I stood up and put some serious tension on the line. I wasn’t going to let this one go. Plus I had brought my net. The fish bored deep but made no really determined runs. I tried to stay calm and managed to get the loose coils of line onto the reel. After much straining  eventually I could feel that I was winning the battle and got the odd flash of golden belly as the fish twisted and struggled in the water. I unclipped my net, drew the fish towards the bank and scooped it up. It was a belter –  look at that tail! 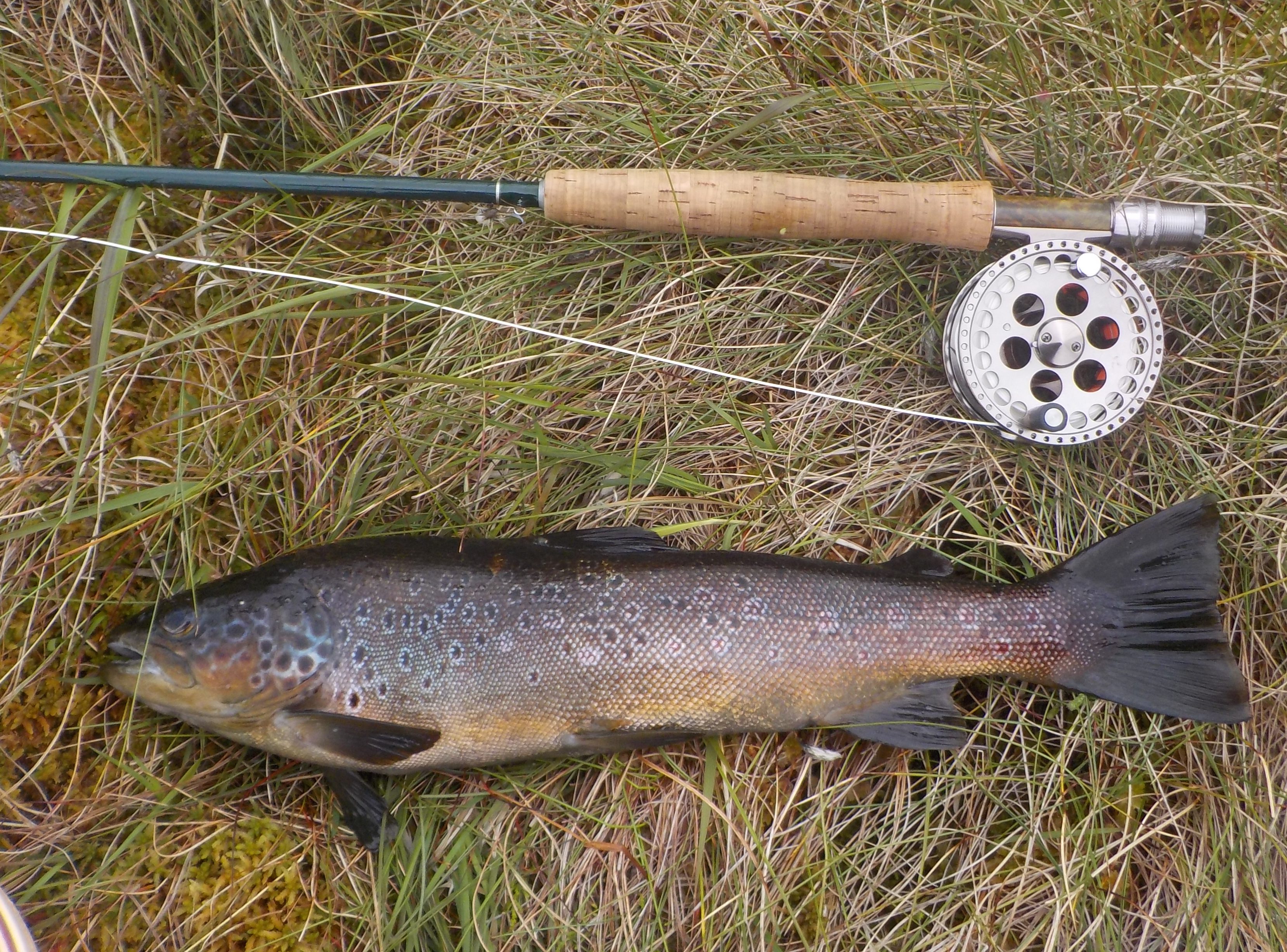 Turned out to weigh 2lb 3oz. Not huge by some people’s standards but it broke my Scourie record and I think it is a corker.

That was it for the day, and indeed for the week. A 4 am start the following morning brought me home after a really memorable few days in the hills.