I was going to save my fishing until later in the week, but the weather forecast looked so good that I decided to give it a crack today. I was a bit worried about river levels given the recent rain, but a quick check on the Environment Agency website suggested that a couple of my club waters might be fishable. First off I headed for the uppermost stretch of the Seven, which I haven’t yet fished. Sadly when I got there the water was tumbling down at a rate and while the depth was probably manageable, it was too highly coloured to risk wading on what is a very tricky bed. So I headed back to Pickering to give the Beck a go.

I tackled up next to a slow stretch of the water where I could see fish rising, so I put the usual emerger on the end of the 7ft 3wt set-up, with around 10ft of leader:

OK, so the ribbing is not so professional but I didn’t suppose the fish would mind that much. I wandered a couple of hundred yards downstream and got in. The water was up by about a foot on its summer levels and was chocolate brown. Not too auspicious: 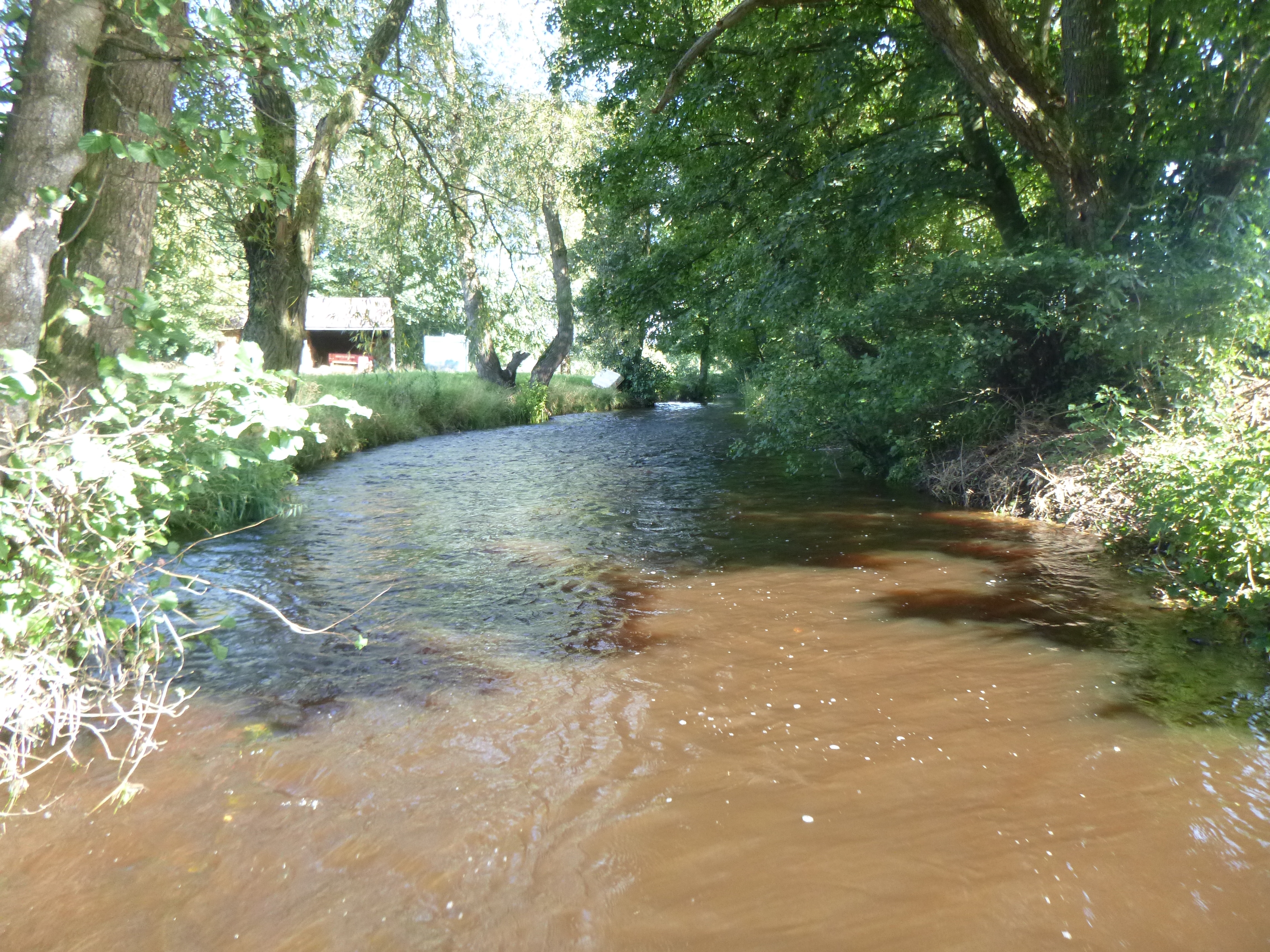 I covered the first 60 yards or so without a touch and was wondering if this was an expedition too far. The sun was shining, the temperature around 15 or 16 degrees and a reasonable amount of insect life was coming off. I persevered, concentrating on any slacker water close to the bank. My resolve was rewarded with a nice fish of around 10″:

That was encouraging. Next cast in almost the same spot produced another take and a slightly smaller fish.

I carried on up the river but with no success. I decided to switch to a goldhead, given the lack of surface activity. I cast into a shallow, fast-moving riffle and felt a tug on the line:

Crap pic, but a small grayling. Three in the bag in the first hour, so things were looking up a bit. Picked up another grayling of similar ilk a few yards further up.

I came to the slower section where I had tackled up and was looking forward to giving it a go:

This stretch is unwadeable, so it’s all fishing from the bank in this field. Because the water is so slow, your leader is usually very prominent and this makes it quite tricky to fool the fish – some of which are very good. But a nice tail wind was putting a ripple on the surface and the fish were still rising, so I was more confident than usual. I removed the goldhead and reattached the emerger. But annoyingly I noticed that I would have company:

A cow and two bullocks. Blast. I know from previous experience that cattle don’t appreciate the swishing of a rod and I didn’t want to have to fish with one eye constantly over my shoulder. Discretion being the better part of valour and all that I skirted around the field until I was out of sight of the blighters. The rises here were not as frequent but still one or two. I saw some movement under the trees here:

and put the fly in. There was a big boil at the fly and a belting fish was on. I was pleased I’d brought my net as I scooped it up. A cracker of maybe 16″:

It had somewhat obliterated my fly…

No matter! Superb fish and the day was officially a success. In the next field the wading is fairly hazardous at the best of times – deep water and large masonry blocks on the bed. With the extra depth on the river it was at the limits of wadability but I got in anyhow. At times the water was only a few inches from the top of my waders. As I came around a bend to this stretch I could see fish rising in abundance. Actually it was the most sustained rise I’ve seen all year:

I got the fly into the water and immediately hit a nice fish:

Despite the disturbance caused by bringing in thrashing fish, the rises continued and takes were coming thick and fast. I’d had around half a dozen of a similar size from this one pool when a big swirl had me once again reaching for the net. Another beauty:

Picked up a few more smaller ones before calling it a day. Fantastic late-season sport on a stunnning autumn afternoon. Just under three hours’ fishing had produced 16 browns – including three corkers – and a brace of small grayling. A good day by any standard.