Nymph-mania on the wild Seven

The opportunities for new fishing are relatively few and far between, so when I was given the chance to fish some pristine water on the upper reaches of the River Seven I leapt at the chance.

This part of the river runs straight off the North York Moors and is a true moorland trout stream: water the colour of weak tea cascading over boulders into pools of a multitude of dimensions. The river here has been barely fished and is properly wild:

I knew the fishing would be tricky – with the boulder-strewn bed making wading potentially hazardous and much overhanging vegetation. While the water is surprisingly wide I opted for a 6ft rod because of the encroaching tree cover.

A hot July day with bright sunshine and the thermometer hovering around the mid-20s. I lowered myself downstream of a good looking pool where fish were rising. Excellent, I shall fill my boots. Well, even to allow such a thought into your head will naturally irritate the gods of angling. I put on a trusty emerger and covered the entire pool for about 15 minutes without a touch. Hmm. Before running out of water I managed to rise two fish without connecting;  a change of tactic was called for. I switched to a size 16 goldhead hare’s ear and headed upstream to the next pool.

I cast in and almost immediately the line tautened. I struck and extracted a nice wild brown of probably around 10″, although it declined to pose neatly for the camera: 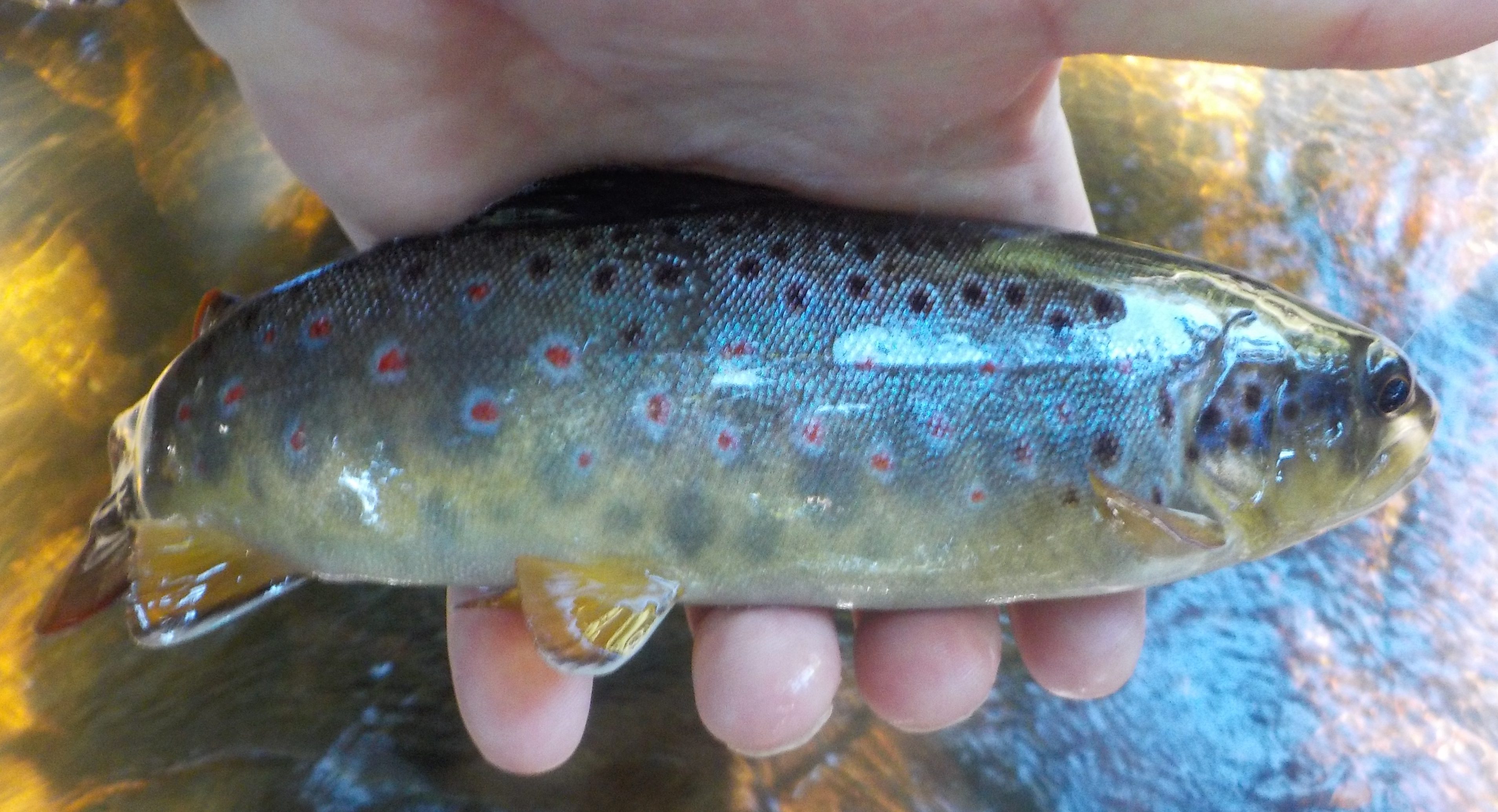 Pulled out three more from the same pool, like this:

I advanced upstream, almost coming a cropper on more than one occasion. You won’t drown in this depth of water if you go down, but a change of clothes in the car is probably sensible. Covered water like this, searching out any  nook or cranny that was reachable:

Touched many fish and lost them, but periodically connecting. That the fish were getting smaller didn’t bother me too much:

Some areas were highly overgrown and getting a fly into the water was beyond my skill:

Nevertheless in those areas that allowed a cast I kept picking up small fish:

and the occasional better one:

I switched to a black spider just to ring the changes and picked off a couple more with that, although by now I had more faith in the goldhead. Fish continued to rise periodically but saw no reason to change the nymphing tactic so persisted with that, through some lovely water like this:

After around four hours of fishing I came to a nice long pool where fish were rising freely.

I opted to change back to the emerger and almost immediately had a splashy take, but failed to connect. This happened – and I counted – 12 more times. There seemed to be nothing wrong with the fly on the face of it so I was flummoxed at the failure to connect. The fly’s body was relatively thickly tied, so maybe the body was leaving too little hook gape on show. Anyway, after many frustrating misses managed to pick up a small fish.

It was the last one of the day. All in all 13 fish to the hand. Many more than that touched the hook. Happy with that for a first outing. A magnificent piece of water and a privilege to be given the chance to fish it.